Japan is a beautiful Country.  Though James Corbett puts a heavy amount of concentration on reporting on events, disecting the mainstream media lies, and collaborating with James Evan Pilato of Media Monarchy on their Friday newscasts on news Next Week...Search his library on Japan.  James Pilato and his family visited him in Japan and they made some videos of that visit.

A former tenant where I live, Tadamasa Kimura, was working on a post-doc project regarding upbringing of children, maximizing their talents and learning in a healthy way.  He gave me an Ikea work table.  He and his wife had a baby during his post-doc visit.  So their baby is American!  What a professional and kind person he is and I am sure his wife is also.  Their baby was adorable.

My father was injured in Japan.  He was very young, having enrolled in the military to get away from a very abusive foster father, who made him and his brothers sleep under the porch on hay.  He may not have been 16 yet, even.  He only spoke of Japan in a loving way and did not like to talk about the war.  His knee was reconstructed and he always limped and suffered significantly over the years, for it took its toll on the rest of his body.  Rarely did he complain.  I wanted to make a good living and help my parents, make sure my father was all set to retire and enjoy a blissful life as a senior citizen.  That never happened.

The Jewish thought appreciates the lives of loved ones and gives them credit.  My siblings could have cared less about his being killed, medically murdered, rigged by  a brother who said I could trust him, he would help me get him in a nursing home that did not abuse him like that one was.  He enjoyed killing him, saying it was a spiritual experience, knowing there was nothing I could do about it at that point.  He did not call me as he had promised, when I left the hospital to check on my cat in my father's home and get a shower and some rest.  Instead, he conspired with the paedophile priest and killed my father.  That priest obviously poisoned my father with arsenic or some other poison to make him bleed out.  He was in his apartment and Dad was bleeding profusely, making my father feel guilty to call for an ambulance because he altered my father's Medicare so he could not have benefits.  I had fixed that before I went to New Mexico to help him, wondering why my siblings were not giving this any attention.  My sister was a housewife.  She had plenty of time to check on him.  And certainly plenty of more money than I did. How is it that society has allowed itself to be so self-serving with their hands out and not caring about the ones who loved them the most?  My father spent thousands of dollars to help her during troubling times.  And other siblings had plenty of opportunity to help Dad; instead, because they would not even help him get a decent doctor, he said he was leaving.  My mother was treating him badly and not one sibling cared about what the cause may be and how to fix it.  They were too busy encroaching their lives with their own luxuries and could care less.  Packing him to drivc himself thousands of miles across the country was a very evil thing.  I should have never trusted my brother.  His act of remorse brought so much hope that he would actually help - but no, my father was considered no longer useful to them, a throw-away.  Is our society dying?  Can we circumvent the NWO's with a real New World Order that will work and allow people to earn what they deserve?  So many good leaders have been murdered these past few years!  CIA murders to incite war is a big reason!  Please be careful but do not put up with deceitful people and let them know you disagree with their behavior.

There are some things we will not have the answers for as far as causes go; but we must stop the "bleeding".  Your life matters.  You matter.  Do what you can.  Don't be intimidated by those who are involved with illegal activity. 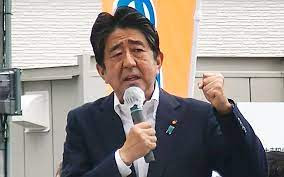 MY RESPECTS TO SHINZO ABE, SYMPATHY TO HIS FAMILY AND ASSOCIATES!

Just when I posted this, a side-popup flashes across my screen!  I do not consider it a feature of the weather!  I consider it a subapp to harm me!  To trespass on my IP! I cannot add anything to this blogpost because the end is blocked now.  I tried and tried.  Hopefully I will not be hacked now that I removed my gmail account from a device I DID NOT EVEN PUT IT ON and changed my password.

THIS BLOGPOST IS IN HONOR OF HIS LIFE

Send your condolence letters/cards to

or through the mail:

I will be downloading the information soon - today or tomorrow.

I will just say, yes, I consider this an act of terrorism AND CIA should be considered as the possible murderers.  They are doing all they can to incite war, to feed the criminal war machine of businesses, the 'MILITARY INDUSTRIAL COMPLEX"

I will do what I can to complete this blogpost today.  This blogpost is already being manipulated, since I just posted his picture.  The TECHNOCRACY IS THE BIGGEST REASON THE ECONOMY IS CRASHING DUE TO THEIR ORGANIZED CRIME AND THE CORRUPTED POLITICIANS ALLOWING IT - SAME ONES WHO COVER UP THE FACT THAT SEPTEMBER 11 ATTACK  WAS CAUSED BY AMERICANS.

I have  a blog titled Thunder Flower - on the Chrysanthumum which originated in Japan.  I wrote a poem on it, too, and should be available to link to in the Table of Contents.  This is a hobby for me so it is ad-free, not monitored and I don't want comments.  Others who would like to engage in conversations can start their own blogs and share anything they want from my blogs.

TABLE OF CONTENTS OF  ALL BLOGPOSTS

add-free, not monitized or monitored. Share what you want.

The frequent piece of news has to do with a suspect angry about how the Unification Church treated his mother.  I made my comments about that.

The link I accessed loudly played news which gave me no choice to listen to , so I just copied the most important issue.

FRANKLY, I SUSPECT POLICE INSIDERS COMPROMISE NATIONAL SECURITY, IN PAY TO PLAY SCANDALS FOR CIA - this one is the "mother" of all scandals!