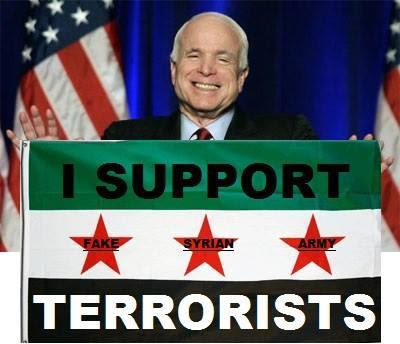 John McCain
Traitor In Chief
TABLE OF CONTENTS OF THIS BLOG, ALPHABETIZED:
http://www.publiusroots.com/2018/04/table-of-contents.html

Due to not having a domain for almost two years and just getting a domain from Google FINALLY (they refused all this tiime, telling me "you don't need one") I am now recovering the blog.    4/29/2020

My TABLE OF CONTENTS are all accessible here, using your phone or tablet:  www.appleofmyeyes.org/2018/04/table-of-contents.html
McCain died today, 8/27/2018

What is in store for tomorrow?  Today there was a fire where the Statue Of Liberty stands,which the Satanists claim is ISIS, the god of fertility, having both genders, wtf.
The island was evacuated.  Reported @Dahboo77.

Add a public comment...
Agreeing with what Joe was saying on video.....
Anne Bradley4 hours ago
Iran-Iraq War was caused by US Military Industrial Complex. McCain is probably alive or given an option- to go through trial and be outed, or take a lethal injection. He was too bouncy to have a brain tumor. No way, no how. Satanic McCain went to Rochester, MN for supposed treatment at the Mayo Clinic and a person of HIS question in his life was murdered! I'm sure he hired a thug but enjoyed being there when the job was done. I bet that man even visited McCain. Can't recall anymore details. Well said, Joe!﻿
Read more
1
REPLY
Anne Bradley4 hours ago
I missed the notification but I was sleeping...Just had to get some things done, but I'm so tired now.﻿
REPLY
Superman7 hours ago
John McCain Todays fun facts!!! He is no hero!!! Okay, people...before John McCain dies and the ridiculous "tributes" to the man make me vomit, let's remember what McCain's real legacy is: His father was the Admiral in charge of the Pacific fleet prosecuting the war in Vietnam Nam. Because of this McCain got preferential treatment in the Navy. He was allowed to become a Navy pilot. But he was a terrible pilot. McCain crashed two navy Jets in his early career. Then while aboard the Aircraft Carrier USS Forrestal, McCain got angry because he had to wait in line to take off on a bombing run. He shut off his engines, opened the cockpit, and in his haste to exit the aircraft to chew someone out about his having to " wait", he hit the button that released his live bombs onto the deck of the Forrestal. He took off running, as the bombs exploded, which set off a chain reaction of bombs from adjacent aircraft, and the ensuing explosions and fires killed 133 sailors aboard the Forrestal. While his fellow sailors were fighting the fire, McCain went to the pilot's lounge below decks and watched the men fight the fire on closed circuit TV. Hours later, McCain took off with a New York Times reporter buddy of his, and went on to say that after seeing the effects of those bombs on the Forrestal, he was beginning to question the morality of dropping those bombs on the Viet Cong. McCain was the direct cause of 133 deaths on his own ship, and was never reprimanded. He was nowhere to be found as the Forrestal had to limp to the Philippines for months of repair work. McCain was married then. His wife was stricken with debilitating injuries in an automobile accident. And was hospitalized for more than 5 months. McCain was off gallivanting with anything in a skirt. Upon returning from Vietnam Nam, McCain found his wife was disfigured by her injuries, which included a shattered pelvis, arm, and legs. In order to save her legs, doctors performed 23 surgeries on her, and had to remove significant portions of the bones in her legs, which left he shorter, and unable to walk, and in a wheelchair, she had to use a catheter. McCain was disinterested in his first wife's predicament. She had to go through grueling physical therapy to learn to walk again. After McCain left the Navy, he was intent on a career in politics. He and His wife Carol had gotten to know Ronald and Nancy Reagan, and McCain was eager to jump into politics. But he decided he needed a more visually pleasing young woman by his side. He callously divorced Carol, the mother of his three children, and immediately jumped into the sack with new wife Cindy, who was 18 years younger. Upon learning of this, the Reagans were shocked and angered by how he had treated Carol. While campaigning for congress, McCain used pictures of himself posing with Mr. And Mrs. Reagan, but there was no hearty endorsement offered by the Reagans. McCain's new young wife was also an heiress to an Arizona Brewing fortune. And let us not forget McCain was one of the Keating 5, who had helped swindle life savings from countless Americans in the Savings and Loan scandal of the 1980's. McCain was in it up to his eyeballs. Yet McCain was well-connected in Washington, and parlayed his connections into a seat in the United States Senate. So before the tearful tributes to John McCain, be sure you remember the facts about this self-proclaimed Maverick. The facts do not agree with that portrait of a heroic patriot and great American. With due respect to his family, John McCain was never the great man so many portray him as. I do not wish the man any harm or ill-will. But neither should we allow this false narrative fairy-tale about this scoundrel of a man as he faces his eternal fate. By JJ McCartney﻿

The ad that played was a transgender promoting www.udemy.com - claiming the be the world's best

Transgenders are not supposed to be allowed in the military

Donald Trump has been determined to be a transgender by profilers
Melania Trump is a transgender. Proven by profilers and other investigations
Ivanna Trump, Trump's first wife, was also a tranny
Trump's second wife had a child which Donald Trump was physically incapable of fathering

Note, the Titanic also polluted the water initially yet it has recovered.