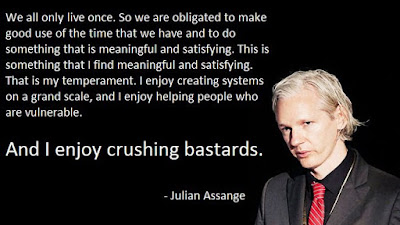 Due to not having a domain for almost two years and just getting a domain from Google FINALLY (they refused all this tiime, telling me "you don't need one") I am now recovering the blog. Hopefully the Table of Contents will be finished by May 1, 2020 but my computer gets hacked and has other technocratic struggles.   4/29/2020

MY OPINIONS ARE MY OWN:   www.appleofmyeyes.org/2018/07/my-opinions-are-my-own.html

TABLE OF CONTENTS FOR THIS BLOG:  www.appleofmyeyes.org/2018/04/table-of-contents.html

Free Julian Assange!
He is locked up for helping the Vulnerable
He doesn’t claim to be Jesus
He is just like us, only better!

Rod Rosenstein is the one who brings up Criminal Charges with USAG Office – not Jeff Sessions!

Rosenstein is son of Heimlich Himler

Rosenstein was up for termination

8/13/2018 - that is not what I said. I said Jeff Sessions recommended Rosenstein for termination - this was altered by a hacker, probably CIA shill.  That's my guess.

yet President Trump deceiver refused to fire him and is helping him keep the job which he hired him for because he has a dirty agenda – to put all the crooks in the Cabinet and more.

Trump doesn’t want Julian Assange to be exposing the Truth, either!  Trump contracts the TV stations, including CNN – which he claims is fake news all the time but does he do anything about it?  NO Because us “stupid people” will follow him because he gives people certificates and invites and other BS – and maybe sends them cloud messages like he did to me,

but I promptly responded

8/13/2018 - no, I did not respond to the cloud message. That was not what I said.  The cloud message appeared and disappeared - too fast to even take a picture.  It's all about technocracy tricks, abuse of power.

because that is deceitful!  I am not a federal agent and if he tried to even communicate to an honest and patriotic federal agent like that, they would consider it wrong!  We have Freedom of Speech and Freedom to Bare Arms on the same law for a reason.  This country is a face-to-face country and those who sleeze behind closed doors are being exposed!

How Bad Is It?
The United States was founded by patriots yet since its founding, the deceivers have been in action through

What is their Main Plan now?

TO HIJACK THE MONARCHY!

TO HIJACK THE MIDDLE EAST!

1. They created a group of business people who have to agree to their secret society’s demands and in return they stay filfthy rich
a. Keep the money circulating only in our Circle  (and maybe the 9th Circle Satanism has some emphasis for that agenda)
b. In 1991, the Bushes’ Cabal purchased $240 BILLION in investments, to mature the day after the September 11 attack!  They made billions from this!  See my blog post on September 11. There is so much more. As you probably realize, the people who lost their loved ones got MUCH LESS than the liars at Sandy Hook Shooting Hoax (who all became instant multi-millionaires as a reward for lying for Obama, CIA man!) See my blog post on Sandy Hook but I don’t even have half of my notes on it yet – I struggle with so much corruption in my own life!
c.   Look up PNAC!
d. There are many, many more pathetic strategies they saturate society with!
1) FYI, George Soros wrote off $315 million in financing  the Trump Tower as an incentive for Trump to get nominated by the Republicans – that way we would have two choices for President:  Illuminati No. 1 or Illuminati No. 2!

**Please research – look at other blog posts I have – I don’t have anymore time to share more here.  They want to crush USA, they want to genocide us, they want to keep the money all for themselves in their freaking pathetic economic circle!

Julian Assange exposes Truth to keep us Free
His unconventionalism is due to the need to be a disrupter for good purposes.
Posted 7/22/2018

AnneMarie said…
The Satanic Cabal - Illuminati, FreeMasons, etc - have been mutilating children through transgender operations. See my blog post on Tranny Watch. See my blog post on John F Kennedy. This is organized crime to create a New World Order!
August 13, 2018 at 11:54 AM