May 9, 2017 -
Recommending POTUS to terminate Comey 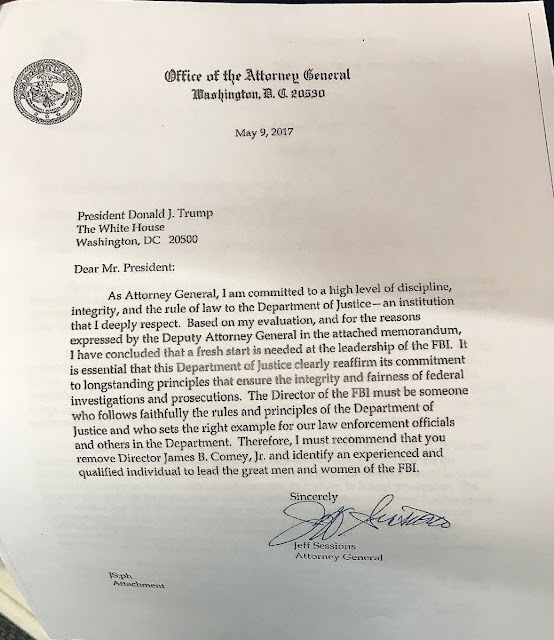 --Where are the Checks and Balances?

They fail to mention the fact that Bill Clinton Fired him because he was investigating Bill Clinton when he was Attorney General back in 1993, I am not sure of the year. It was the first year Bill Clinton was in office.

This pisses me off so greatly - to see these rep's waste their time with things like this and so I have prepared a letter which I need to type yet, which I will post here.


My Table of Contents are available here:  copy whatever you want. This is unmonitored and ad-free.  Decide For Yourself    http://www.appleofmyeyes.org/2018/04/table-of-contents.html

Note, although this story ran in voluminous websites and if you searched on any of their names the articles would show, apparently the algorythms have been altered to stop that trick.

Dave Allan Brat
Economist serving VA’s 7th congressional District since 2014. He was a professor at Randolph-Macon College.
There is little or nothing to comment on him.  I presume he has economic interests in getting all this media attention.  All you have to do is google each one of their names and up pops numerous articles on their glorious letter to Jeff Sessions telling him to jump through hoops or else.

<insert 6/16/2018>  You may have boticed that one or more Senator at the confirmation hearing of Mike Pompeo actually had the audacity to lie, claiming a witch hunt on Pompeo, as I recall, alligning it with "what Comey went through". I will verify this, as I believe I shared it on the Mike Pompeo blog post. www.appleofmyeyes.org/2018/03/mike-pompeo.html - I may need to verify the name the of the politician or correct who the politician had referenced.
### end of insert>

Matt Gaetz
Representative in Florida, since 2017, where Ron DeSantis is.  He’s in the 1st Congressional District. He’s on the Budget, Armed Services & Judiciary Committees.  He was born in Hollywood.
In 2010, he replaced Rep Ray Samsem, who left due to corruption charges against him.
Wikipedia: “In 2016, Gaetz withdrew from the state race to run for the US Houseseat representing FL’s 1st Congressional District – since his incumbent Jeff Miller had announced on March 10 he would not seek re-election”  His???
By the way, Rep Gaetz, how’s that Mueller Special Counsel working out for you, since you insisted on it? I know, taxpayers pay for it all. And you had the audacity to claim Jeff Sessions wasn’t doing his job.
Wikipedia shows this: “Miller serving 1st District to 2017 and that he’s succeeded by Matt Gaetz…Miller announced he would not seek re-election 2016”  Read this a few times if you don’t catch why this makes no sense.
Rep Gaetz is an attorney with Keefe, Andchors, & Gordon Law Firm.  He claims the government should be more open.  (More???? We already have people spilling out all our secrets and Snowden is still at large – and Clintons obviously told everybody everything in their secret societies and cults – excluding the ones they ate, of course.

Paul Gosar
Representative in AZ. He’s a dentist who claims he didn’t vote for recent budget balance law because Congress has a “spending hypocracy”. No mention of the Omnibus budget, which seems to be the elephant in the room but what difference does it make to media?  All they care about it resurrecting a witch hunt on Jeff Sessions.
So tell me, Rep Gosar:  Is your bark worse than your bite?

Andy Harris
Andrew Peter Harris is a medical doctor. A US Rep for Maryland, 1st Congressional  District since 2011.
He was State Senator from 2003-2011.  His website claims he has courage and common sense.
So why wasn’t he watching what Rosenstein was doing as US Attorney there for the longest time that anyone in that position in the USA has ever served?  As a doctor, I would also think he would be interested to verify if Rosenstein is son of Heimlich Himler.
Oh, I know, it’s all just peanuts for a politician who has courage and common sense, probably.

Jody Hice
Masters in Southwestern Seminary; Dir of Ministry from Luther Rice Seminary. Pastor in three GA counties for 25 years.  He has the Jody Hice Show.  I smell Operation Mockingbird.  I wonder how many tines he has unusefully complained about Jeff Sessions on his show. Frankly, it is my opinion that no political representative should be allowed to have direct media access and that includes owning their own media platform – unless it is cleared through Congress.
GA’s 10th District since 2015.  He serves on Armed Services committee, Oversight committee, Natural Resources committee. He is Vice-Chair of Government Operations under the Oversight committee.

Tod Rokita
Theodore Edward Rokita.  Indiana’s 4th Congressional District since 2011.  Previously Secretary of State 2002-2010.
Trump Campaign texted a campaign volunteer for Rokita that Trump wanted Rokita to take down the signs on his yard because he said that Trump/Pence did NOT support Rokita.  That was not really applicable to his sign, since it said supporte by Trump/Pence team members.
He says on his website that “The political elite are not immune to the rule of law and must be held accountable” And that’s why he and 10 of 435 Congressional Reps are “standing up to Jeff Sessions”.  WTF
Why didn’t he say anything when Jeff Sessions recommended Comey to be fired – or removal of Stzruk and Lisa Page, since they were making scandal out of their work.  What about Rosenstein who hired Mueller as a political game of chess?
Everything unravels and it includes lack of serving the country and he wants to blame it all on Jeff Sessions! Gee, how brave of him!

Claudia Tenney
Rep, NY, District 22.  Elected Nov 2016.  Previousy served on the NY Assembly 2010.  She’s an Attorney. She owns Mid-York Press, Inc. it is a commercial printing and mfg company handed down to her by her grandfather, who started it in 1946.  They have 70 employees.  She has a private practice in Clinton, NY as well.  She also owns Tenney Media Group.
NY has a corrupted governor and destructive government which restructured its departments to evade responsibility on people who have been harmed.  I know. I was one of the casualties.  I wrote a lot in my notes but I am not going to share anymore here.  I go through so much hell.
I smell Operation Mockingbird – how handy – and I don’t believe anyone should be allowed to serve the country with issues that are conflict of interest, or opportunity to abuse power.  I am not saying she is, but I certainly consider her going down the rabbit hole attacking Jeff Sessions, blaming it all on him, when there are over 20,000 indictments waiting to be served – unless they have been unsealed and they devised a different way of serving them since they may not be able to get the help of the military.


Now I need to go on with other posts. Sorry this took me longer than expected to update/correct.  4/21/2018

AnneMarie said…
Tomorrow cane and went. I had to devote most of my time to DSS Food Stamps problems, after completing and submitting the form they mailed me FOUR times, last two certified with return receipt. I went to DSS in person, since they still not only did not correct their processing but when I checked my card, the information denied the card existed! Another post I need to create is one on Slavery! The DSS worker told me,"That's because you didn't ever return the form we sent you". I said, "Yes I did - four times! And you have a copy of it right here! Look at it!" She said all I needed to do was complete a two page form, which she backdated to February.So I hand wrote that the form was never sent to me and dated it April 20. I also stapled all documents and on the two page form, indicated "please see attached" I paper clipped the two page form to the fully-stapled documents because a representative had to sign the form that I signed. No doubt they will fraud records. After all, What Difference Does It Make? They are slaves to the corrupted infrastructure, which is run by the Secret Societies and Cults!
April 21, 2018 at 7:51 AM

AnneMarie said…
It is now edited yet Blogger centered all the typing. It was not like that when I copied it to paste. Just keep that in mind where you see certain words isolated for probable psy op purposes. it was all straight typing. No isolated words to take out of context. FYI
April 21, 2018 at 10:13 PM