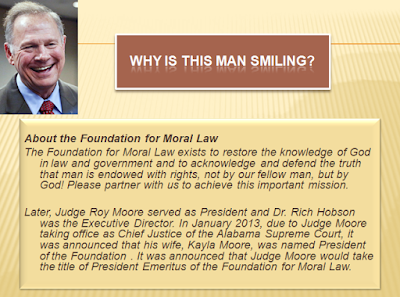 The Secretary of State of Alabama flip flopped on Judge Roy Moore.  Though he said he supported him, he claimed the illegal election was legal, even though several were arrested for voter fraud and these women he didn't even know came out of the walls 30 days before the election to lie about him.

Doug Jones was involved with the Iran Contras, he probably used cocaine with Clintons at parties. He helped a KKK member also. His track record spells one thing: DISASTER!

Note, I just checked this 13Dec2017 and it had been altered.

The following is what I posted on Facebook and emailed:

The lines aren't all that's lit! This radio host #BuckSexton is bucked-up! He hangs up on people he wants to suppress and read only segments of a letter from Judge Moore to Sean Hannity=framing and slander of Judge Moore! He accused an attorney of being Canadian as a way of disqualifying him as attorney for Judge Moore, despite the obvious fact he's licensed to practice in Alabama. Then he has the audacity to say that Judge Moore stereotypes people! ...He plays Maxine Waters audio saying "Impeach President Trump!!" but fails to play what she said later. Telling people to kill him! He says Glen Simpson of Fusion GPS is the Russian Dossier (though DNC accused Vladimir Putin's niece to begin with, but what difference does it make) and defends the Fusion man as being a victim of "obvious political targeting" on the "Hillary Oppo Research" ---probably done from the Clinton Library, which Trey Gowdy git a judge to approve a warrant to RESEARCH the pedophile-promoting library - but Comey obviously tipped them off and the two deputized agents were totured, buried alive 100 miles from the Clinton Library, found dead! After all, nobody can challenge the Satanic Grand Dame Hillary Clinton http://www.hrcwikileaks.Appleofmyeyes.org
More added to the #Clintondeadpool - and don't forget #September11 because Hillary Clinton and John McCain planned 9/11 with their entourage of about 125 people, Field McConnell explains in AV7 video. The testimonybof the women are good for one thing - lawsuit against them! They have disrupted the public with their lies! And SPORTS a try Emily Companio is completely full of BS because she fails to address the fact a case has to have grounds first! There are no groinds! Lying women is reason enough to dismiss a case - the fact there is no case is also important to point out because they need time to build "CREDIBILITY ANALYSIS" thru BS media! Callers who challenged the lack of grounds, since women came out of the woodwork 40 years later when DNC NEED to get rid of Jeff Sessions, because the $hit is gonna hit the fan big time now that Christopher Wray is FBI Director and he and Jeff Sessions are working tirelessly - along with our GOOD FBI AGENTS, who really uphold and apply justice. This talk show host is a two-faced scumbag like Sean Hannity. .... Believe me, he's gonna get a piece of my tweets! He has a responsibility to be honest with the public. He's a sleeze.